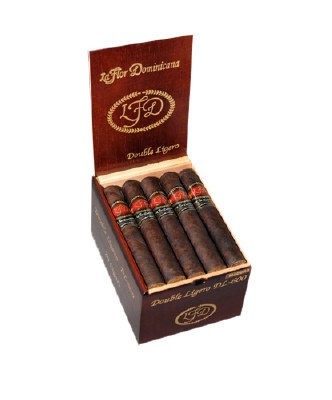 If you enjoy full strength cigars LFD 700 will not let you down.

When I cut into a La Flor Dominicana Double Ligero I am whisked away to the mountains of Santiago and Camp David hotel. The sites, the sounds, and the aroma of the cigar factory the morning after a night indulging in Ron Barcelo rum. The cold draw is tobacco and molasses with an aroma of molasses and figs.

Once the cigar is lit there are notes of molasses and mocha with nuances of earth. As we progress through the first third of the cigar some spice builds on the retrohale with a nose tingling finish.

The second third of the La Flor Dominicana Double Ligero builds in intensity and on the flavor profile. The cigar has rich flavorful notes of mocha and figs with the underlying sweetness of molasses. Around the halfway point some espresso notes emerge with a spicy finish on the retrohale.

Entering the last third of the DL 600 from LFD the coffee notes become dominant with a touch of leather. In the background some sweetness lingers but the finish is spicy with notes of black pepper through the nose.