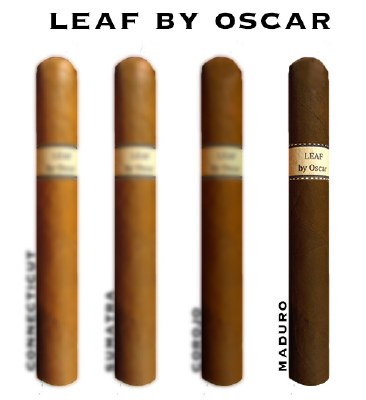 The aroma coming from the foot offers notes of soft milk chocolate and aged peppery tobacco. After cutting, the prelight draw offers those same notes, but seems milder than anticipated. Moments after lighting, the burn line is thin and straight which is an indicator of a proper and lengthy fermentation period. Notes of rich cocoa and black pepper are immediately apparent, but this is far from being a full power smoke. It’s sitting at a solid medium body which offers a lot of nuances to show with every puff.

Moving onward into the halfway point and the notes have opened up even more. The smoke is becoming more leathery and a natural sweetness has started to escape from the wrapper onto my palate. Nuances of dried prunes and brown sugar start to make an appearance nearing the final third. The construction is still solid as well, needing no attention.

Finishing up on the Leaf by Oscar Maduro and I’m very content with the performance of this cigar. The smoke is still cool, giving off many of the same tasting notes that were prevalent in the second third. It’s burn line didn’t waver much so I didn’t have to bust out the torch. Barry would be proud, considering he HATES when I constantly touch up my cigars.