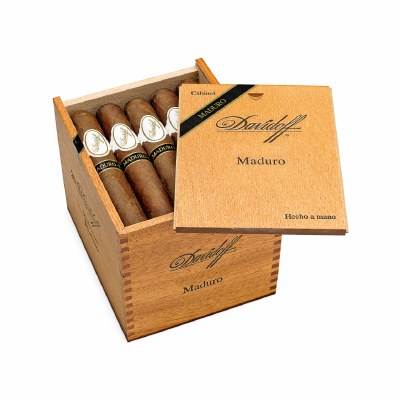 The nose of the unlit Davidoff Maduro is a cross between raisins and licorice creating a sweetness that is enticing, while the cold draw of the cigar serves up some earth notes with a hint of licorice.

Once the cigar is lit the cigar takes on elements of a classic Davidoff cigar with notes of hay and earth that are very reminiscent of a barn. While we got into a debate at work if this was a compliment or not, there is no denying these Davidoff flavors that are there trademark much like Pepin spice.

As we progress deeper into the first third some notes of sweetness emerge that border on anise which goes well with the dark espresso that is developing as the cigar begins to transition into the second third.

The second third of the cigar sees the earthy notes disappear and the focus is that of espresso, nuts, anise and a hint of honey. The honey note is more of an afterthought that is experienced on the short finish of this classic maduro smoke.

The last third of the Davidoff Maduro sees the return of notes of earth with continues anise, and there is some cedar on the finish of the cigar which is also slightly sweet and moderate in length.