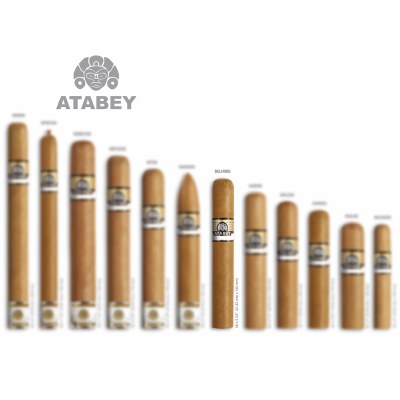 When someone asks me for the best cigar I’ve ever smoked, I think of only 2 or 3 cigars, and the Atabey is definitely one of them. I don’t want to create too high of an expectation here, but this thing is outstanding. I think that the word “complex” gets used too often in cigar reviews, but it definitely applies here. You get distinct changes in flavor as you go through each third of the cigar. I got a sort of sweet grape jelly mixed with lemongrass at one point, earthy coffee notes, and white pepper. Although it’s probably not possible after reading this, the best way to smoke this cigar is to go in without expecting anything good. Treat it like any other typical smoke and you’ll be pleasantly surprised. The Atabey is, without a doubt, one of the best cigars I’ve ever smoked in my life.

The cold draw of the Atabey Delirios is a cross between molasses and the powder like coating of a Necco wafer. There is some faint earth present as well along with a butter richness. The aroma off the foot of the cigar serves up heavy notes of molasses and fig. The cold draw delivers the notes that I love the most, but the question is how does it smoke once it is lit.

Once the cigar is lit, there is some syrupy sweetness with subtle notes of earth (specifically grass). As we move deeper into the first third of the cigar there is a rich buttery finish with a slight lemon like note on the retro hale. The moderate finish of the cigar is that of molasses.

The last third of the Atabey Delirios begins to lose some of the sweetness as some notes of coffee begin to develop making me wish I had a cup of Cuban Coffee. There is some earth present as well with grass notes that was experienced in the first third. Through the nose the cigar remains some wood notes emerge and the cigar has a moderate finish.