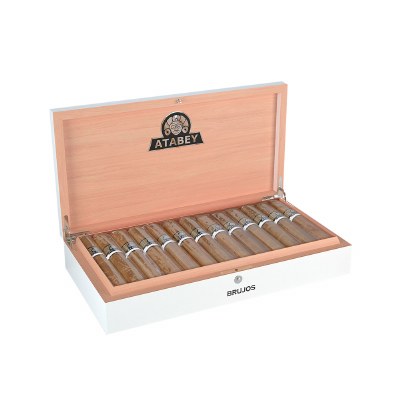 he cold draw of the Atabey has a wonderful molasses like flavor and a slight maple taste while the foot has a similar aroma to the nose. Once the cigar is lit, there is an incredible smoothness and a creaminess that I have not experienced like this.

In the first third of the cigar it takes on a Cubanesque flavor with notes of wood that border on maple. There are also notes nuts and coffee thrown into the mix. On the finish the cigar has a very faint molasses that is trying to come to the surface but has yet to do so.

In the second third of the cigar the wood notes becomes more of a background for the nuttiness that becomes the dominant note along side some coffee notes and a hint of molasses. The cigar remains buttery smooth, with just the hint of toast. The complexity of the cigar is mind-blowing in the sense that there is so much going on latching onto specifics is almost a difficult task.

The last third of the Atabey the molasses note on the pre-light begins to take hold as the primary taste with a hint of cherry along for the ride. The finish is buttery smooth and short, which means it doesn’t linger.