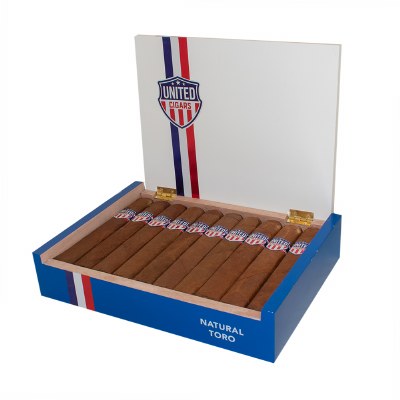 6 x 54 - Natural - Box of 20
Packed in weathered looking wooden cigar boxes the box pressed United Cigar features a band that matches the packaging. Featuring a nostalgic looking shield of red, white and blue on a wood like background the United Cigar screams patriotism. It features a hard box press and by this I mean the square lines are clean. Quite frankly, the cigar looks awesome.

he aroma off the foot of the cigar is sweet with some chocolate notes and a hint of apricot. The cold draw of the cigar has an earthy part to it with a sweetness as well. Once the cigar is clipped it is very much reminiscent of a Padron Thousand Series.

The first third of the cigar has some sweetness to it with underlying notes of coffee and nuts. As we progress deeper into the first third the sweetness becomes a defined cocoa and the third comes to a close some spice develops through the nose and slightly on the aroma.

The second third of the United Cigar Box Press sees the stick continue with notes of nuts and coffee, but the spice begins to kick further up through the nose and some notes of clove that develop at the half-way point and linger for about an inch before dissipating.

The last third sees an increase in cocoa notes, although they come off more as the powder used in hot chocolate compared to pieces of cocoa. On the finish there are notes of dark chocolate and a lingering spice.