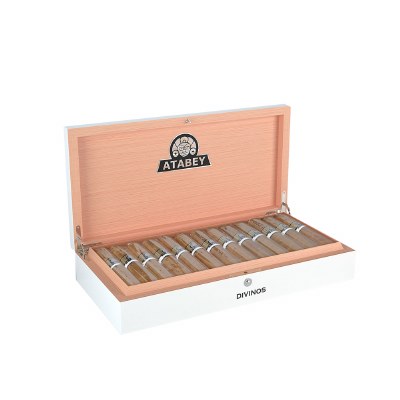 The cold draw of the Atabey Divinos is reminiscent of maple and molasses, with a hint of earth. On the nose of the cigar it is similar to that of the draw though much more subdued.

Upon first light one is easily impressed with how smooth this cigar is. The balance just simply cannot be beat by any cigar on the market. There are notes of warm butter, maple, and cuban toast. On the retrohale some of the molasses notes are detectable as well. In smoking this cigar it remains me of a log cabin, with a bearskin rug. On the table is some fresh maple syrup, cuban toast and a fireplace burning as well.

As we progress into the second third of the Atabey, the buttery richness continues with notes of toast and some cedar. The sweetness of the molasses and maple have left the building as the cigar takes on some new nuances. The aroma of the cigar adds to the complexity with some floral elements through the nose.

The last third there are some cedar and coffee notes, while the aroma of the cigar continues to be slightly floral. The finish is coffee with a slight nuttiness.