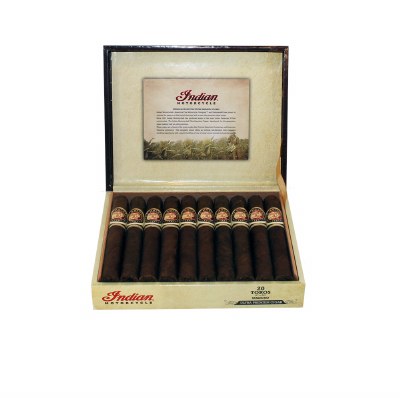 The foot of the cigar serves up some meat like notes with a hint of black pepper and a little bit of damp earth in the background. Once the cigar is cut there is a sweetness along with notes of hay and earth.

Smoking into the first third of the Indian Motorcycle cigar there are notes of leather with a hint of mocha notes that quickly switch over to dark chocolate. There is some pepper notes on the finish as well as through the nose.

In the second third the cigar balances out and the aroma becomes extremely enjoyable with some sweetness and spice to it. The dark chocolate note returns to mocha with a slight creme on the finish. Through the nose the cigar has some hearty red pepper notes that keeps you on your toes. The chocolate notes fade away at the halfway point as the cigar takes on characteristics of leather and earth.

In the last third of the cigar serves up notes of earth and leather as the nicotine levels increase. The pepper through the nose turns down a notch and there is a slight floral element on the aroma.