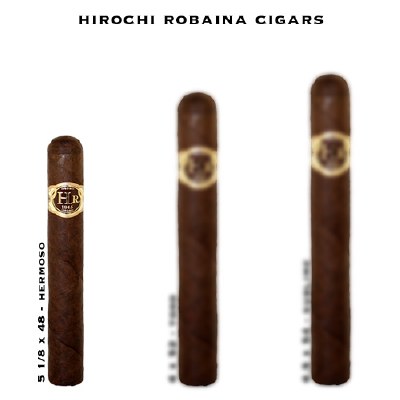 The cold draw of the cigar was reminiscent of cocoa and some cedar. The aroma of the wrapper was like fine chocolate under the nose and the foot of the cigar which was closed served up chocolate nuttiness. Due to the closed foot the cigar lit up quickly and instantly served up some spice, coffee and sweetness.

The first third of the Hermosa seems sweeter than the Toro. There is some cocoa/chocolate notes with a bit of nuttiness. The pepper experience on the first pull has faded revealing a wonderfully complex cigar. Smoking further into the first third one gets lost in the notes of pistachios, cedar, chocolate and subtle spices.

The second third of the Hirochi Robaina sees the nuts begin to take on more of a hazelnut flair and the notes of coffee begin to become dominant around the halfway point of the cigar. There is some subtle chocolate notes though they get lost in the slightly spicy finish.

The last third of the cigar the aroma becomes noticeable more so then the last two third with elements of cinnamon. The notes remain coffee, nuts, and a hint of earth with some spices on a prolonged but enjoyable finish.