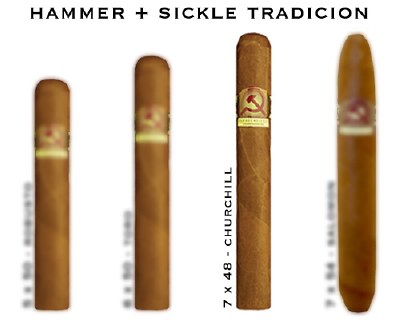 The cold draw of the Hammer & Sickle is very Davidoff-esque. The notes of barnyard are very Henke Kelner with notes of grass and hay the dominant taste. The foot of the cigar has more of those same notes, that are synonymous with the morning dew. Once the cigar is lit there is a nice creamy flavor profile that tastes like coffee that is both light and sweet made with cream instead of milk.

As we continue into the first third of the cigar the notes of grass and hay are center stage and the creamy note experienced on the first light fights for real estate on your palate. There is also an almond like taste that occasions shows up but doesn’t last long enough to completely enjoy.

In the second third of the cigar the almond note that teased through the first third finally begins to take hold. Also present is some continued earth notes and some Dominican spice.

In the last third the notes all come together with a creamy smoothness, hints of almond, toast and earth providing a truly complex Connecticut smoke that is incredibly balanced.