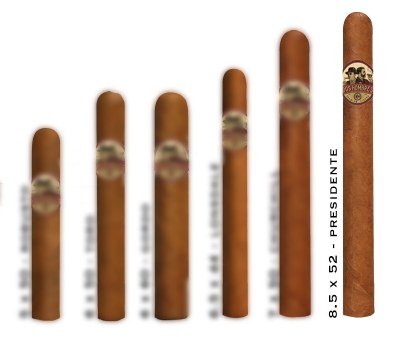 The cold draw has notes of nuts, a subtle caramel and earth which creates a nice traditional profile before lighting this one up. The aroma off the foot of the cigar is reminiscent of a barnyard with notes of hay and earth. Once the cigar is lit a creamy coffee component that reminds me of cafe con leche becomes the first note of the stick. .

As we smoke the first third the dominant notes are a rich roasted coffee with hints of nuts and cedar. The retrohale, of the cigar offers a mocha like sweetness with subtle amounts of earth and a moderate finish.

The second third of the cigar sees some notes of caramel and toffee enter the mix with a continued dominant note of roasted coffee. The nutty notes move to the aroma of the cigar with the toffee being dominant on the retrohale with a hint of pepper.

The last third of the Dos Hombres Cabinet Honduran sees the development of earthy notes of dry hay become dominant. There is a subtle sweetness in the background of the cigar with the notes of nuts, coffee and cedar becoming more of an afterthought. The retrohale sees some added spice though the cigar remains complex and balanced that I have a hard time putting it down.