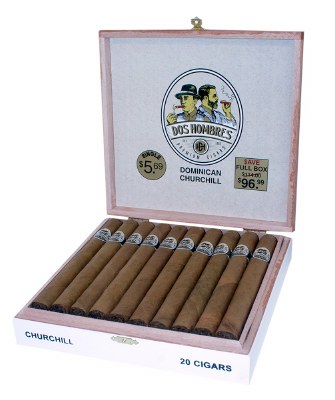 The cold draw has a subtle vanilla cream note to it with hints of earth and hay, with the latter two notes being dominant on the nose. Once the cigar is lit there, the first note is reminiscent of rye.

Smoking the first third of the Dos Hombres Dominican Cabinet some hints of maple begin to emerge with a subtle touch of molasses. As we continue to smoke the cigar as we get close to the next third, some hints of pecans to emerge. The retrohale of the cigar is extremely smooth with a sugar sweetness.

As we breach the midway point, the pecan notes really begin to shine and reminds me of driving through southern Georgia. As the cigar progresses further some hints of toffee begin to emerge with a subtle pepper and earth on the aroma and retrohale.

In the last third some hints of honey begin to emerge with continue toffee and an abundance of pecans. The retrohale sees a little more pepper added to the mix with some dry earth.