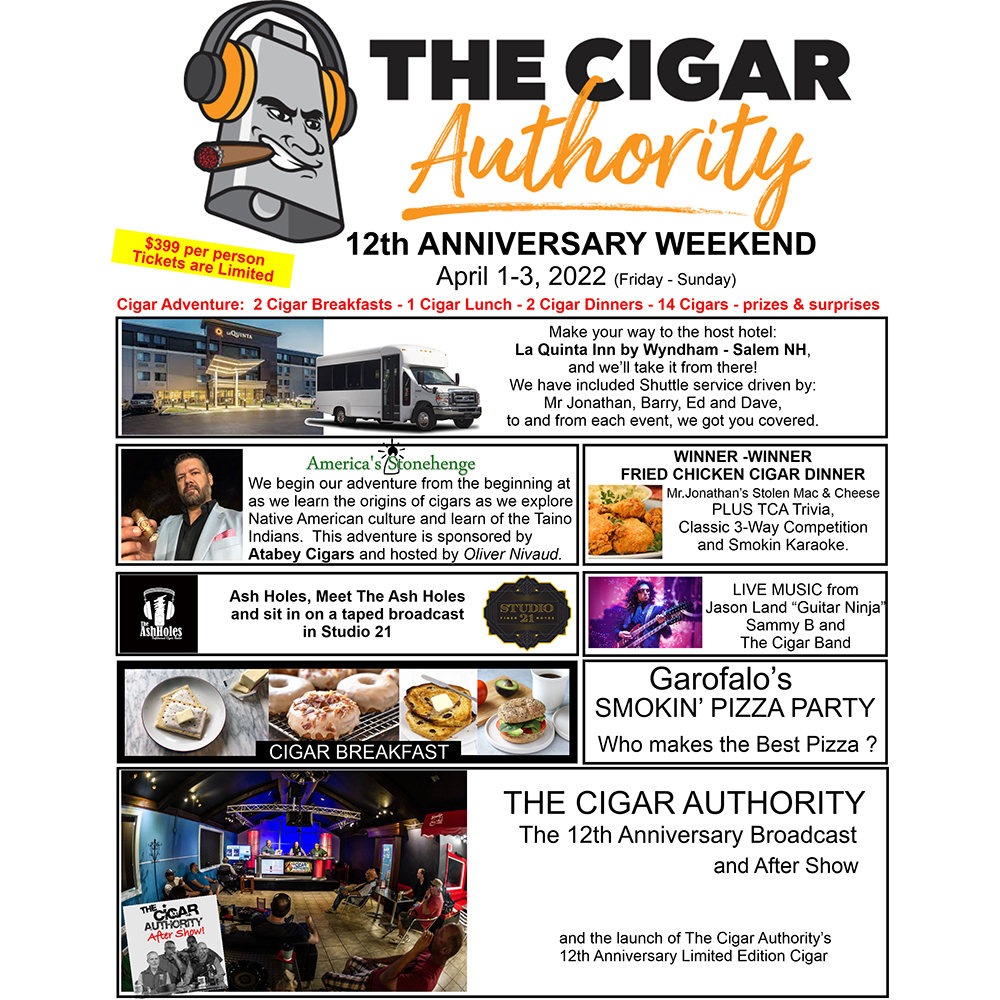 IMPORTANT: When signing up, please add a comment with your shirt size

It's the 12th Anniversary Party weekend for The Cigar Authority. Join us April 1st - 3rd for this weekend of celebration featuring cigars, food, laughs and so much more.

*Does NOT include airfare/hotel or transportation to and from airport

ROOM RATES will be $129 + Tax per night per room we will provide a registration code for this rate.

You do NOT NEED to book it for Thursday, BUT the 1st event will happen on Friday at 1pm pickup.

If you can fly in, drive in or get to the Hotel by 1pm we will pick you up and take you to the first event:

If you are not there, you will have the itinerary and can meet us at our next stop. We will leave on time.

1pm    Shuttle pick-up at the Hotel

There will be 4 Shuttle Vans –that will pick you up and each one of us will be a bus driver.

You will pull from the hat for each trip who you will be your driver (Ed, Barry, Mr Jonathan or Dave)

where you will learn the origins of cigars, explore Native American culture & the Taino Indians.

and some Smoking Karaoke.

9    Shuttle pick-up back to hotel

8am      Pick-up shuttle to Two Guys Seabrook for Cigar Breakfast featuring Butter on a Pop Tart,

10    Shuttle Pick-up and off to Two Guys Salem

12    LIVE broadcast of The Cigar Authority featuring the launch of TCA 12th Anniversary Cigar and Garofalo Cigar followed by The After Show taping.

9    Shuttle pick-up back to hotel

9am    Don’t forget to change your clocks forward as daylight saving ends.

You will need to get yourself to the airport (Boston Logan International) or (Manchester-Boston Regional Airport).

Starts at 1pm on Friday April 1 and its over at 1pm on Sunday.

IMPORTANT: When signing up, please add a comment with your shirt size 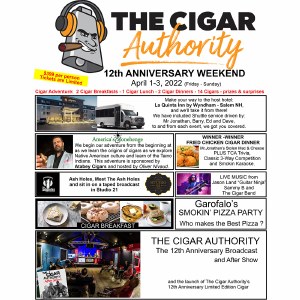