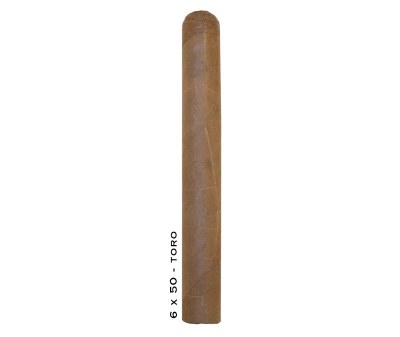 6 X 50 - Natural - Single
The Caleanoch comes packaged in canisters of 12 Cigars. The Caleanoch 25 sees a red tartan pattern adorn the top of the packaging, where the Caleanoch 50 uses a blue tartan pattern. Inside the tins, the unbanded cigar features a Ecuador grown Connecticut Shade wrapper that has a few veins and subtle tooth. The cigar has a nice weight to it, and the foot reveals tobacco that is evenly colored which is unexpected by yours truly, as I figured the Peat Cured tobacco would be definitely darker.

The Caleanoch 25: The aroma and cold draw of the 25 provides as you would expect, peat but there is also a molasses like sweetness in the background. Once the cigar is lit, the peat is there, but it isn't as dominant as expected. The cigar has notes of nuts, earth and of course peat. Around the half-way point there is a wasabi like spice that develops, and the peat becomes more dominant as the cigar progresses. The finish of the cigar isn't as long as I expected, though it does become more lengthy when pairing it with a peat scotch such as Laphroig.

The Caleanoch 50: The prelight is as expected, with an abundance of peat on the aroma off the foot and the cold draw. It is as I would imagine the aromatic qualities of the air on the Island of Islay to be. Sadly, I've never been so I could only imagine. Once the cigar is lit, the peat dominates but doesn't overwhelm the palate. There are hints of earth present as expected and some spice on the retrohale. The Caleanoch 50 is more straight forward and would pair were in my opinion with Lagavulin.