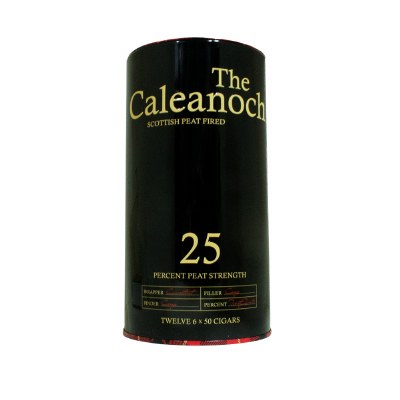 6 X 50 - Natural - Canister of 12
The Caleanoch comes packaged in canisters of 12 Cigars. The Caleanoch 25 sees a red tartan pattern adorn the top of the packaging, where the Caleanoch 50 uses a blue tartan pattern. Inside the tins, the unbanded cigar features a Ecuador grown Connecticut Shade wrapper that has a few veins and subtle tooth. The cigar has a nice weight to it, and the foot reveals tobacco that is evenly colored which is unexpected by yours truly, as I figured the Peat Cured tobacco would be definitely darker.

The foot of the cigar serves up to no surprise notes of peat but there is also a slight note of molasses hiding in the background. The cold draw serves up some notes of peat and a touch of nuttiness, similar to pistachios.

Once the cigar is lit, the peat that was experienced on the cold draw and aroma isn’t as dominant as expected. I liken the finish of the cigar to that of a scotch that has some peat much like Laphroig though not as dominant. The cigar has more going on then one would expect. There is some earthy components as well as a nuttiness.

In the second third of the cigar the peat is still an after thought though as we reach the halfway point it is more visible and it is more dominant on the finish. On the retrohale there is a mix of wasabi and it heights some nutty notes on the palate as well.

The final third of sees the peat notes become the dominant flavor profile with some earthy components in the background and some nuttiness on the finish mixed with peat. While the finish lingers it doesn’t over power the palate making it extremely enjoyable.