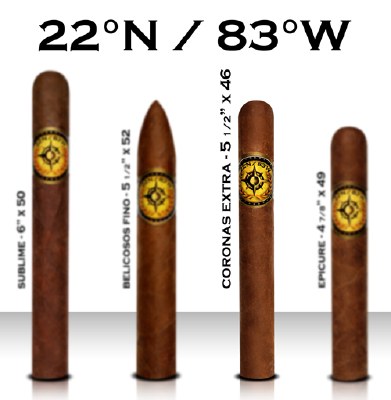 5 1/2 X 46 - Brazilian Corojo - Single
The chestnut colored Brazilian El Corojo wrapper has a rustic aged appearance to it. There are some veins present and the cigar is seamlessly rolled. The gold, yellow and black band features a compass with the coordinates of 22N/83W. In the hand there are no soft spots and the foot is nicely packed. The cigars come in a cabinet style box, with the logo branded into it.

Hands down my favorite cigar for the money. I first had one in the cigar Authority care package. Since then I bought 5 more and it would have been a full box if I had a bigger humidor. I’m not great at flavor profiles so I won’t even try it. The burn, smoke production, and flavor are all on point.

The cold draw serves up some salty notes of cashews with a subtle earth. I got lost on the cold draw enjoying it for quite some time. Once we move to the foot of the cigar and the aroma of the wrapper the nose is cedar from the cabinet boxes the cigars are packaged in.

After the cigar is lit the notes of cashews remain with a nice saltiness to it as well. Also in the mix are some almonds and walnuts and a touch of earth. About a quarter-inch in, I retrohale the cigar for the first time and am treated to a touch of leather and a blast of black pepper. The cigar is medium in body but full in terms of flavor at this point with a short to moderate finish. Around the half way point some coffee comes into play that has a subtle hint of espresso.

In the second third the notes of nuts lose their dominance as the flavors of coffee become dominant. There is a hint of earth present on the finish which has become moderate in length. Through the nose the black pepper remains as well as on the aroma as the cigar becomes shorter.

The 22N / 83W concludes with well-defined notes of walnuts and pralines. As we move past the band some cedar comes into play as the pepper notes begin to subside. The aroma of the cigar is sweet and woody with a moderate finish that doesn’t saturate the palate.

I like flavor in a cigar and this one is lightly and delightfully sour with a lightly spicy finish. I've outgrown my childhood sweet tooth and it's a pleasure to find a cigar which offers a different flavor. The draw isn't as easy as I like. I will buy more!